Fee, Fines, and Finding Economic Justice: Using the Self-Sufficiency Standard in the Courts to Counter the Imposition of Legal Financial Obligations on the Poor

Stopped by the police for a broken tail light, Alicia was told that, unbeknownst to her, her driver’s license had been suspended. Briana had obtained an inexpensive cell phone, as required by the Child Welfare department, so that they could contact her to set up meetings with her children (and thus not lose custody permanently); but the court said if she could afford a cell phone, she could afford to pay court-imposed fines and fees, and ordered her to do so. Charles was found to have a small amount of marijuana in his possession. He was offered a choice – be charged with a felony (and possibly go to jail), or participate in a drug program and be “clean” for 90 days, and the charge would be dismissed.  The program, however, would cost $1,000 plus $10-20 per random drug test (1-3 times per week). 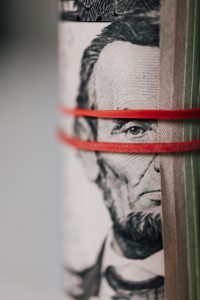 These are just a few examples of how courts impose Legal Financial Obligations (LFOs), or fines and fees, without regard to an individual’s ability to pay.  To fill revenue gaps worsened by the Great Recession, many courts increased charges for their “services” on defendants, most of whom are low income. The collection of revenue in policing systems leads to more arrests, harsher convictions, and higher charges, targeting low-income and BIPOC communities and reinforcing systemic and institutional racism.[1]

In defense of court cases against the practice of LFO’s, the Self-Sufficiency Standard can help establish who has the ability to pay fees and fines, and who does not. If an individual’s income falls below the Standard, imposing LFOs will only further impoverish them, and threaten them with additional punishment, such as imprisonment or a license suspension. I have recently served as expert witness in four cases where I have been asked to establish the plaintiff’s ability to pay. I found that all the plaintiffs involved had incomes well below the Standard.

Washington State is at the center of unjust LFO practices as some local courts funding themselves primarily through LFOs. In Wakefield v. Benton County, the plaintiff, Briana, as described above, was ordered to pay the court because she could “afford” a cell phone. Even as a single person, her income was inadequate to meet her basic needs, much less pay the court. Courts, however, can threaten plaintiffs with arrests or jail time if they remain unable to pay. In the Seattle Municipal Court, Black individuals have the highest likelihood of incarceration following unpaid LFOs, sometimes as great as a 26% risk for a $175 fee.[2]

In Virginia, driver’s licenses get suspended without notice after 40 days of nonpayment of court-ordered fees and fines. Approximately one-third of Virginia’s drivers had suspended licenses, many who were unaware until they were stopped for some other infraction. These suspensions also disproportionately impact BIPOC individuals, with Black drivers comprising more than 80% of license suspensions in Washington, D.C. from 2011-2016.[3] One plaintiff had even been unable to accept a promotion because the job’s duties required an active driver’s license.

I am involved in several other cases where I use the Standard to argue that jailing people, or suspending their driver’s licenses, for nonpayment of LFOs is unjust. There are a range of groups bringing cases, including the ACLU, the Civil Rights Corps, the Consumer Law Center, and local legal services, and some legislation has been passed barring the collection of LFOs if unable to pay. In Washington State, for example, HB1412 would provide relief to people without an ability to pay their LFO. If you are interested in learning more, or initiating litigation, please contact us at cwwss@uw.edu, we may be able to refer you to legal resources to bring cases using the Standard to promote economic and racial justice in the court systems.

The Self-Sufficiency Standard 1 month ago

RT @uwescience: This DSSG team is designing & testing a database for the Self-Sufficiency Standard, a project from the Center for Women’s W…

The Self-Sufficiency Standard 1 month ago

RT @JJAatFPWA: When we concentrate our efforts on the circumstances that conspire to thwart a person’s prospects from the first day of thei…

Visit our #Tableau tool to interactively review the data:

Thrilled to share the culmination of our year long investigation of the impact of the proposed American Families Plan on families in #WashingtonState, thanks to @UWBridgesCenter for funding this effort.

The Self-Sufficiency Standard 5 months ago

A useful take on issues with the 2020 ACS dataset - including a spurious overcounting of households and an underrepresentation of people affected most by the pandemic. Defining “Use with Caution”: How We’re Navigating New Census Bureau Data

Excited to share the new Arizona Tableau look up tool released yesterday. Visit to explore how much is income is necessary to meet the basic needs of working-age families. Thanks for the collaboration @women_giving!

A third of New Hanover County residents are housing burdened. We asked a data scientist to explain why

RT @women_giving: Join us for WFSA's Annual Luncheon Series to learn from Lisa Manzer & Annie Kucklick who will speak about how this standa…

People of color, particularly Black and Latinx householders, were disproportionately more likely to struggle with economic insecurity: 42.8% of Latinx and 41.6% Black households did not have wages that were adequate to meeting their basic needs.